Warning: Trying to access array offset on value of type bool in /var/www/vhosts/funnymemes.net/httpdocs/wp-content/plugins/buddypress/bp-core/bp-core-avatars.php on line 1672

Mesut Ozil made the most surprising move of the latest transfer window in the English Premier League, the English domestic football league, by leaving his former club Real Madrid and joining the North London side, Arsenal. This current activity brought Ozil, already a star player, further into the limelight and he has become an Internet sensation, not because of his football skills but because of his looks! His big “staring-at-you” eyes are a sensation on the Internet and people just don’t seem to stop sharing funny memes comparing him to a one wide eyed celebrity (and at times even cartoons). Here’s a list of the people, rather the things, he has been shown to resemble, starting with my favourite one – Nemo! 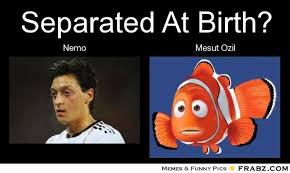 The maker of this meme has purposely tagged the picture of Nemo as Mesut Ozil and that of Ozil as Nemo, to show that Ozil does not only resemble other human beings with big eyes but also the wide eyed Nemo! One can only guess how Ozil might have felt after seeing this one. 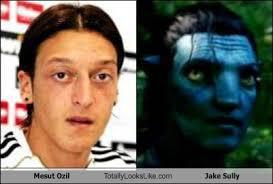 In this one Ozil’s picture is placed beside Jake Sully’s, yes, the alien from James Cameron’s Avatar. It is unknown whether Ozil is a fan of the Avatar who tried to save his planet, but whether he wanted to look like him or not is anybody’s guess. 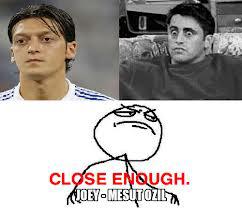 Probably the funniest character in the show Friends, Joey, staring wide eyed at something that has frightened him is compared with Ozil’s face in a normal situation. Yes, you have to be really frightened to have eyes like Ozil. 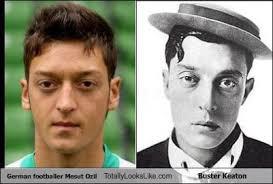 Nothing is complete without the multi talented Buster Keaton. After playing numerous roles in numerous movies, he would probably be the fore runner to play the lead role if ever a movie is made on Ozil. Surely Mr. Footballer would be as pleased as punch.

Check out: The Harlem Shake: Bringing it Back in Style